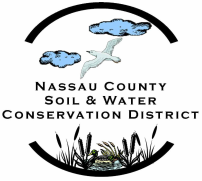 Conservation districts began with an Act of the President in 1937 called the “Standard Soil Conservation Districts Law” allowing each state to organize conservation districts.  Soil and Water Districts are political subdivisions of the state.
The Nassau County SWCD was formed and authorized by the county in 1977.  Over 70 years since the first district was formed, there are over 3,000 conservation districts in the United States working on many aspects of resource protection.
The mission of districts is to coordinate assistance from all available sources, public and private, local, state and federal, in an effort to develop locally-driven solutions to natural resource concerns.  There is an amazing array of projects that the Nassau County SWCD can and is doing in our own backyard.